I wanted to train for a marathon during the summer (instead of the wainter like my last 5 marathons) and felt so strong after the Phoenix Marathon that I really wanted to go for a big PR.  The Big Cottonwood Marathon was the perfect choice-fast course, early September, not too far away from home so I signed up in April and started training in the middle of May.

I had previously used Hansons Marathon Method beginner plan and had such great success with it that it was only obvious that I use the advanced plan this time around.  It really wasn't much different from the beginner, except the recovery runs tacked on a few extra miles.

I used the goal finish time of 3:25 to determine the pace of my training runs.  I knew this was a lofty goal, but I felt up to the challenge.  I'd say I hit all of my paces, although they never quite felt comfortable.  I only missed a handful of easy runs, like when we were at Lake Powell for a few days or when we went to Roosevelt.

The week before the race was uneventful.  I did a few easy runs and was feeling good.  I looked up race reviews from previous years and was starting to get a little freaked out about the downhill, but there was nothing I could do about it now.

I was planning to drive to SLC by myself, but Steve was adamant that he was going to drive me.  I was so thankful he was there for me.  I don't think I would have finished if it weren't for him being at the finish line waiting for me.  And I definitely would have struggled driving home by myself.

On Friday, we got to SLC  around 4:30 and went straight to the packet pick up.  Then, we headed to the hotel and laid everything out, and went to dinner at a Cafe Rio nearby.  We also had to stop at Target for a few last minute things and were back at the hotel by 8 and asleep by 9:30.  I actually slept really well considering it was the night before a big race. 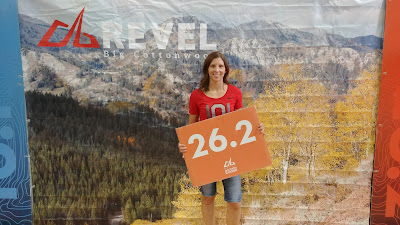 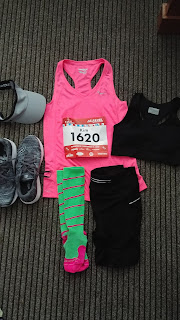 My alarm went off at 3:41 and I got dressed, put in my contacts, and was out the door by 3:50 so Steve could sleep.  In the lobby I drank some water with nuun, and ate my usual Starbucks banana nut bread.  At 4:15 I headed outside to meet the bus in the parking lot.  On the bus ride up, I slowly ate my banana and talked with some other ladies about the race (what else?!).  As soon as we got to the top, I used the porta potty right away and then sat in my blanket and tried to stay warm.  I was actually expecting it to be colder since we were 8,000 ft up, but it wasn't too bad.  The whole time I kept sipping on my water with nuun, and around 6 I got back in line for the porta potties.  This line took a lot longer so at 6:15 I started to drink my UCAN while in line.  Once I used the bathroom, I took off my sweats and sweatshirt, loaded up my gels, iPod, and headphones, and dropped my gear bag off.  Then I sat by the start line and had about 5 minutes til the start.  I started to feel like I needed to go pee again, but I didn't think I had time with how long the lines were.  I couldn't take it anymore and went back to the porta potties.  Luckily the lines were short, only 2 people in front of me, so I was back at the start right on time.

I didn't see any pacers cause I was towards the back so I wasn't really sure how to pace myself.  I've always heard, "Don't start out too fast!" so I really tried to hold back that first mile even though it was STEEP.  My watch beeped at 8:03 and I knew that wasn't good.  I was hoping to stay under 8:00 for all 26 miles.  Looking back, that should have been my fastest mile.  By the end of mile 2, my calves were not happy.  They were already feeling the strain of the downhill and cramping up.  At mile 3 there was a pretty big uphill and flat section so I knew that would be a slower mile.  I was passing a lot of people on this one as there were a lot people walking.

Around mile 4 I started to get really uncomfortable because I had to pee so badly!  I couldn't believe it as I had used the porta potty 3 times before the race.  It's normal to feel like I have to go at the beginning of a run, but that usually goes away pretty quickly and I don't even need to go until an hour or so AFTER I've finished the run.  But this was just getting worse and worse.  I even considered peeing my pants because I didn't want to lose any time, but it's a lot harder to pee while you're running than you might think.  Between miles 6-7 I sipped on my first GU and took some water, hoping to get my mind off my bladder.  However, when I passed mile 9, I noticed we were at the start line for the half marathon.  There were tons of empty porta potties so I did something I've never done in a marathon before.  I ran off the course and used it.  I probably lost about 1:30 off my time but it was so worth it!  I peed a ton and felt so much better after that.

Finally I was settling into a groove.  I had my audiobook going, The Champions Mind, and was feeling good.  For the first time this race, I felt like I might actually make my goal of sub 3:30.  Most of my miles at this point were around the 7:40s and felt effortless.  While my calves were still throbbing, I knew there was nothing I could do about it so I kept telling myself to Deal With It, a mantra I had just heard in my audiobook.

I took another gel around miles 11/12 and again at mile 17.  At this time, I switched to music and tried to get pumped up for the hardest part of the race.  I knew at mile 18 I would see Steve for the first time so I was really excited for that and spotted him right away with his Ohio State shirt! 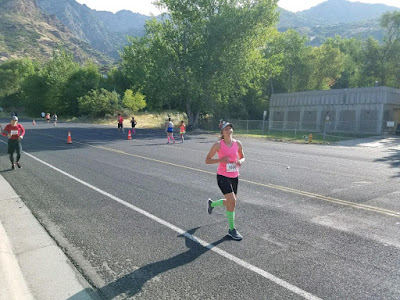 Miles 18-22 were death.  There were gradual rolling hills and we were not in the shade of the mountain anymore.  It was hot, my legs were heavy and cramping, and it would have been so easy to just stop and walk.  There were people everywhere stopping and stretching.  I just put my head down and kept going.  I took another gu at mile 20 and was getting a little nauseous.  I tried to pass one person at a time and just focused on that.  My paces were in the 8:30s and it felt so hard.  I saw Steve again at mile 21 and he said I'm still on pace for a 3:25 finish.  He ran with me for a second and it gave me a little boost to keep going strong.  But at mile 22 I did something else that I had never done in a race before...walk.  I was running up a hill and I was going so slow that I figured I could walk just as fast, so that's what I did.  It lasted maybe 30 seconds, but it gave me the rest I needed to finish strong. 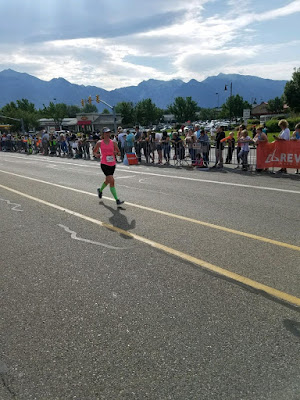 At mile 23 there was another uphill, but I actually went up it feeling strong.  At mile 24 there was a big time downhill and I flew down it.  My legs were hurting so badly, but I knew I was so close.  I thought maybe I could still get my sub 3:30, but math is hard when you're delirious from running 25 miles.  The last mile I passed a lot of people, and noticed a few others laying on the ground with medical help around them.  I just kept thinking how mad Steve would be if I didn't at least PR so I ran as fast as my legs would take me.  I finished in 3:31, a 3 min PR!!! 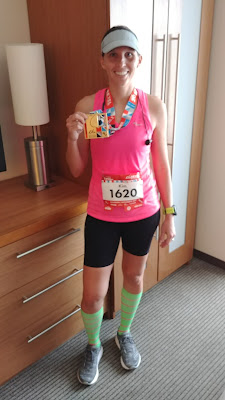 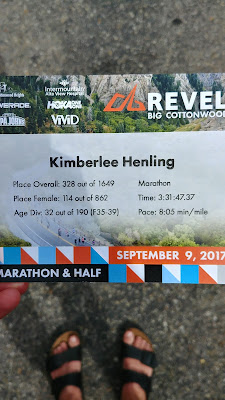 The best thing that ever happened was when they handed me an icy towel as soon as I crossed the finish line.  It was amazing.  I went over to Steve and started crying and laughing.  I was happy to be done and have a new PR, but I was hurting all over and a little sad from missing my goal of sub 3:30.
My calves were crippled at this point and I literally couldn't walk, but otherwise I felt totally fine.  I didn't have an appetite for anything other than cold water, so we left right away.  We went back to the hotel, showered, and left for the long drive home.  I'm sure sitting in the car for 8 hourse was the worst thing to do after a marathon, but I just wanted to see my kids and sleep in my own bed.

While I was in the race, I was thinking about how miserable I was and that I didn't want to run any more marathons.  But here I am now thinking about which race I want to do next and how much fun running marathons is.  We runners are funny people!

A few things to celebrate from this race:

Email ThisBlogThis!Share to TwitterShare to FacebookShare to Pinterest
Labels: marathon